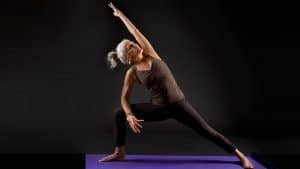 With menopause, women’s bones lose the protection of estrogen. The decrease in bone mineral density (BMD) that occurs with aging is called osteopenia when it is mild and osteoporosis when it is more severe.

Bone fractures, especially of the hip, often trigger a downward spiral in health. Researchers have shown that in comparison to fracture-free individuals of the same age, those with hip fractures face a 3-4 times greater risk of dying.

Medications Can Have Serious Side Effects

A number of pharmaceuticals are available for treating osteoporosis, but they have serious side effects. This includes gastrointestinal distress, femur fractures and jaw disintegration.

Bone is a living tissue with two types of cells. There are osteoblasts that build bone and osteoclasts that destroy bone. The mechanism of action of the medications is to block the osteoclasts, but they don’t build new bone cells. In contrast, weight-bearing exercise stimulates the osteoblasts and the building of new bone.

Daily Yoga Shown to Be an Effective Bone-Building Option

Yoga is a Sanskrit word that means “union” and has been practiced in India for thousands of years. During the last few decades in the U.S., hatha yoga, the physical practice of specified poses, has been demonstrated to offer a range of health benefits. These include enhanced flexibility and range of motion, stronger muscles, better balance and posture, as well as stress reduction.

For more than a decade, Dr. Loren M. Fishman, a Columbia University physiatrist who specializes in rehabilitative medicine, has been gathering evidence to determine whether yoga is an effective therapy for osteoporosis.

In a small pilot study back in 2005, participants showed increased bone density in their spine and hips from 12 minutes of daily practice of 12 specified yoga postures.

Based on those positive results, Fishman expanded his research to include 741 people from 2005-2015. Mostly supported by his own funds, three more researchers from Rockefeller University, Brigham and Women’s Hospital and New York University assisted Fishman in recruiting volunteers worldwide via the Internet.

Of that group of 741, 227 did the 12 assigned yoga poses daily or every other day over the decade, which were the inclusion criteria for the final data analysis. Of the 227 who met the practice frequency criteria, 202 were women. The average age of that group at initiation was 68, and 83% had osteoporosis or osteopenia.

What Does a Decade of Data Show?

Analysis of a decade of data revealed that all 227 participants showed improved bone density in the spine and femur. Hip density also improved, but the changes were not significant. Additional lab results of a study of bone quality of 18 of the participants showed enhanced internal support of the bones. This parameter, not measurable by a scan, is also important in preventing fractures.

Before the study, the 741 participants had suffered a total of 109 fractures. A decade later, there were no fractures or serious injuries reported or detected by x-ray in any of the participants, including those who didn’t meet the practice criteria.

See the 12 postures below and go here to read the 2016 study published in Clinical Interventions in Aging.

Of course, none of the information in this article is intended to be medical advice and you should talk to your doctor before starting any new exercise plan.

Now, let’s get a conversation started!

Have you experienced a bone fracture or been diagnosed with low bone density in your 60s or older? Do you practice yoga? If so, do you find that it helps your body to stay flexible, while strengthening your bones? Please join the conversation.

Medical disclaimer: Nothing in this article is medical advice. Please consult with your doctor before starting any yoga or other exercise program.

What Do You Think About the Right to Live?

6 Keys to Being Creative at Any Age