Can You Hear Me Now? The Art of Communicating with Your Partner 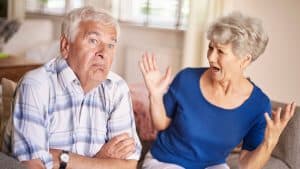 According to a short Google search I just conducted, the best historic evidence suggests that marriage as a formal institution has existed for nearly 5,000 years.

In all that time, there has likely never been one single wife who, at some point or other, didn’t blurt out these words of frustration to her husband, “You don’t listen to me!”

I’d even bet that if we dialed the clock all the way back to prehistoric times when relationships were less formally defined, we’d hear some exasperated cavewoman crying out, “Ug, ug, ugggggggggg!” at a caveman who had no clue why she was frustrated enough with him to club herself on the head.

Seeing the Humor in Communication Blunders

Communication challenges between my Colombian husband and me go beyond his having a “Y” chromosome. For one thing, English is not his first language, and Spanish is not mine. This led to some cross-cultural misunderstandings in the beginning of our relationship wherein he wondered why I was asking him to close the “chicken” (kitchen) door and I wondered why he mentioned his “tonsils” so frequently. (He was actually saying entonces, which means “so” in Spanish).

And for another thing, he has a 40% hearing loss in his left ear from repeatedly rupturing his eardrum while diving in his younger days. Whenever I’m feeling kind of frisky, I have to be sure to whisper sweet nothings in his good ear or there’s not going to be much action.

Neither second language struggles nor especially hearing loss should be treated lightly, but we try to see the humor in the situation. My husband must wear ear plugs whenever he swims to prevent contracting an ear infection which could further compromise his hearing.

When he forgot to take them along on our honeymoon over 10 years ago, he still insisted, despite my repeated bilingual warnings, on jumping in the South Beach surf every day and swimming halfway to Spain. By week’s end, as I predicted, he had a raging infection and couldn’t hear anything out of the affected ear. When we got home he went straight to the ENT.

Time to Call the Doctor!

“Doctor, it’s a very bad situation for me,” he explained with some desperation. “I just got married last week and I can’t hear anything my wife says with my left ear.”

“Oh no, that’s not a good way to start a marriage,” she replied sympathetically.

“Not at all,” he continued, “Because I can still hear her very clearly with the right one.”

Ha, ha, he’s such a funny man. But a few weeks ago, I stopped laughing. He seemed to be paying even less attention to what I said than usual, and I had a sinking feeling he was going completely deaf. I urged him to schedule an appointment with the audiologist for a retest and I waited anxiously the day of his appointment to find out the results. As soon as I got home from work, I pounced on him, unable to wait a second more to learn if he was losing his hearing.

“Well?” I intoned, my voice tense.

“Well,” he started, “There’s good news and some not really bad, but interesting news.”

“What are you talking about?” I asked impatiently. “Just tell me!”

He unfolded a paper with the test results and laid it on the counter. He said he knew I wouldn’t believe his account unless I saw the actual report from the audiologist.

“Why would I doubt you?” I asked, confused.

The report showed that while he hadn’t exactly lost hearing overall, his ability to hear sounds within a specific frequency range was fairly impaired. The precise range was the one within which 90% of all female voices fall. He could hear above or below that range just fine. It took a moment for me to process the implications of this new information.

“So,” I said, enunciating clearly into his good ear, “You are telling me that you are nearly physically incapable of listening to me,” I said.

“That you’re more likely to respond to one of those ‘silent’ dog whistles than to the sound of my voice,” I continued.

“And that you could hear, say, Barry White – grumbling from heaven – but not me in the here and now.”

My Husband’s Excuse for Ignoring Me

How convenient, I thought. My husband had the perfect “out” most other men only dream of, an excuse for everything from not taking out the garbage to not phoning for take-out. If this information ever fell into the wrong hands, every married man on the planet would take up diving, intent on destroying his hearing in the “wife frequency range.” They’d likely consider it a small sacrifice for living a nag-free life.

So, ladies, consider this a cautionary tale in the interest of preserving marital bliss. Do everything you can to keep your husband in the shallow end of the pool. And should he slip away and plunge off the high dive, remember that you still have a secret weapon to get his attention, the dog whistle. Don’t be afraid to use it. And you know how to whistle, don’t you? You just put your lips together and blow. It certainly did the trick for Lauren Bacall and Humphrey Bogart!

Are there times when you feel like no one is listening to you? Do you and your husband (or partner) have any communication problems? How have you learned to communicate, and live happily together? Please share your story in the comments.

Hurry—Tarte’s Iconic Shape Tape Concealer Is Half Off RN