The Best Reason Your Kids Should Become Young Parents 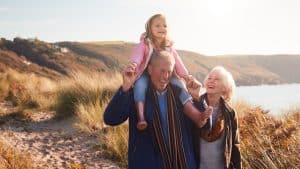 Many of us whose children have entered their 30s are still waiting to become grandparents. We understand that our kids have every right to make their own decisions about when and whether to become parents. If they never want to have children, that’s their business.

Many, however, are happily coupled up and just waiting until they’re “ready” to begin the parental journey. Meanwhile, you may be more than ready to be tagged “Grandma.”

How the Argument Is Framed

I have two school-aged grandchildren, so my empathy for your impatience comes not from the perspective of the yearning grandparent nor even the parent, but from the point of view of the child, because I was the daughter of old people. Does anyone ask the children?

The typical now-vs.-later debate tends to weigh the youthful advantages of higher fertility and greater physical energy against the benefits of completing education and achieving financial stability, which take time. Both sides make convincing points.

The Case for Waiting

Statistically, early pregnancy decreases the mom’s lifelong income. That’s a lot for the woman to give up in both money and professional fulfillment. It impacts the family as well, although I would argue that children need basics but not wealth. Parents are the ones who like to get their career ships on a steady course before taking on additional crew.

Studies also indicate that earlier motherhood correlates with a higher rate of depression. Some people promote government help with childcare, tax relief, higher education and mental health as a means of leveling the playing field for younger families.

Counterpoint: Have Them Now

Delaying parenthood has its own downside. Miscarriages increase with age, and the fertility issue alone is concerning. It’s expensive and a lot of trouble to get pregnant when it’s not happening easily.

According to the American College of Obstetricians and Gynecologists, fertility begins declining by age 30. In their 20s and early 30s, 1 in 4 women will get pregnant in any single menstrual cycle. By age 40, the figure drops to 1 in 10 women.

Starting later also limits options for spacing out the kids’ ages and for having a big family. And we’re always hearing older moms fretting about their bodies bouncing back very slowly, if ever.

No One Asks the Kids

Young dads enjoy playing sports with their kids, while older dads feel they have more wisdom to guide them. Each side of this conversation is valid, even the reasons for delaying parenthood that boil down to “I don’t want to have kids yet,” a simple desire to stretch out a carefree lifestyle as long as possible.

That’s all fair to the moms and dads. But what about the children? The pertinent literature presents the parents’ self-reporting along with empirical data on how the kids turned out. I have not found research surveying the kids, grown or otherwise, about their experiences. So I’ll supply that information right here.

Because my parents met late in life, I was born to a 43-year-old mother and 50-year-old father, and then I was urged to do the opposite. “Have your kids while you’re young, and grow up with them,” my mother repeated to me frequently.

Understandably, my parents were a bit old-school, but they were great parents. I can’t say I suffered by being their daughter. But that worked against me in a way, because I was always so scared of losing them.

You know the way parents check the breathing of their sleeping babies? In our house there was role reversal. If I woke up in the middle of the night, I’d listen at my parents’ bedroom door to make sure I could hear their gentle – and not always that gentle – snoring. If they got sick or just were late arriving home from a movie, I’d turn into a little girl with a big worry.

The One Thing That Hasn’t Changed

Of course, that was then. It was so unusual to have older parents that my dad was often assumed to be my grandfather. Today, there’s no stigma if you’re 10 and your parents are in their 50s. So any feeling I sensed of being different in my youngest years doesn’t apply much to my grandchildren’s generation. But one thing hasn’t changed, and not to be a downer, but that’s death.

From what I can tell, a lot of people expect to live into their 90s. But life expectancy for someone born in the United States when our now 30-something offspring arrived – the 1980s – was about 74 years. By just before the pandemic, it had risen to 78 years.

Despite my anxiety, my parents each lived an average lifespan. Dad was 74, and Mom was 82. The trouble was my own age: only 24 when I lost my first parent. My sweet father missed out on so much of my life, and it still makes me sad.

Being born late in my parents’ lives also cheated me out of grandparents. The two who were living when I was born died when I was 4 and 12. If 38 becomes the preferred age for people to have children in future generations, grandparents will be 76 when that child is born. The honored great-grandparent may soon become a quaint concept of the past.

Parents want to do what’s best for their children. Having some financial resources makes raising kids easier. But giving them young parents who have lots of energy and are likely to remain vivacious as the kids grow and have their own children is also a very nice thing to do for them.

If you’re trying not to nag but want your children to know that you would love to be a grandparent, you can tell them you read about this 68-year-old woman who grew up with older parents and, not enjoying that aspect of her childhood, was always very glad she had her first child at age 26 and grew up with her kids.

Are you a grandparent? Were you young when you had your kids? Do you think having kids early on is better for the children? What is your experience with having older/younger parents, no/all grandparents? Please share your thoughts below!

Headband Wigs Are Trending Like Crazy & Here Are My Favorites