Will AI Write Your Novels Soon? 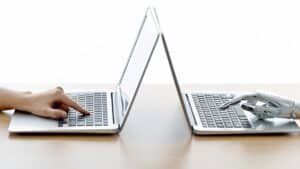 I have never been particularly excited by the idea of Artificial Intelligence (AI). It seemed something remote to my everyday life, although I have undoubtedly been exposed to numerous examples without my ever knowing it.

But today, I was blown away. A friend of mine runs a book marketing agency, and he asked me and a few other writers to try out a new AI system, known as ChatGPT. He was curious to see what we would get.

The form asked me to set out a scene (location, date, time of year, other detail) and a character (gender, age, marital status and aims). I am not a fiction writer, but I made up a potential scenario on the spur of the moment.

What AI Can Do – Setting a Scene

First, here is scene setting as written entirely by AI.

Second, here is character description as written entirely by AI.

So How Did It Do?

These passages were received in a few hours, but presumably generated in seconds.

My first reaction was a mixture of shock and admiration. How could a machine take a few small ideas and flesh them out so well?

My second reaction was more critical. Perhaps those of you who are – or were once – teachers (or who simply like good writing) will share my concerns.

The writing has a somewhat stilted feel, with repetitive and dull sentences. A high school student would undoubtedly be marked down for such lack of variety.

Would one write that ‘dilapidated’ buildings were in ‘disrepair’ as these are virtually synonyms? The descriptions feel a bit trite, with little novelty.

Too many sentences start with “She…”. Too many descriptions including the word ‘always’. There is a need for paragraphs to give the writing a sense of pace.

But nonetheless, I was fascinated. The prose of AI, like that of ordinary students or even writers, can – and will – doubtless be improved with practice and better instruction. One can expect that the same exercise repeated in a year or two would show greater sophistication.

And the implications are huge. Will our novels be written by AI in the future? Or, perhaps, written by AI and edited by novelists? Will it matter, if the reader is happy?

I have been bitten. I am fascinated by AI.

Have you seen examples of AI writing before? Do such developments worry you? Or do they excite you? How would you like to see AI developed in coming years?

My No-Item-Over-$5 Drugstore Makeover Video – I LOVE This Look!

How to Maintain Your Exercise Routine (Even During the Holidays) + VIDEO

6 Questions to Ask Yourself Before Volunteering in Your 60s

Love Story: How Writing One Can Change Your Life