How to Divorce Your Adult Children and Restore Your Sanity 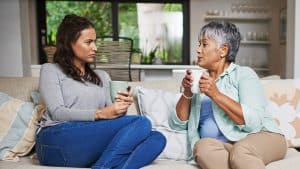 I am known for exposing the “elephant in the living room.” Those things everybody knows but nobody is talking about. Not every mother-daughter relationship reads like a Hallmark card, and our culture makes that a shameful secret to bear.

Dr. Christiane Northrup suggested that the bonding hormones that flood a mother’s blood stream at childbirth stay with women for about 28 years.

It is no accident, then, that the first round of truly adult separation (not teenage rebellion) begins to rear its head somewhere around 30 for women and the menopause years for their mothers. For the first time, the veil begins to lift and we see each other for the women we have become.

When it Comes to Your Adult Children, What is Normal?

Some estimate that 96% of American Families are dysfunctional in some way – making it the norm. But “normal” is not necessarily healthy, and it certainly falls short of the abundant life we’ve been promised.

Women are held responsible for the relational health of the world – at work, at home, family health and wellbeing, the sexuality, the promiscuity, the cause, the cure and the results. When a true perpetrator arises in a family, the mother protects ala Mama Bear. If she doesn’t die trying, she can later become a target.

Mom is apparently the one who knew (or should have known) what was happening at every moment of every day to their children – physically, emotionally, mentally and spiritually. After all, moms have eyes in the backs of their heads and are equipped with the unusual ability to read minds, right?

What is Healthy When it Comes to Adult Children?

M. Scott Peck wrote, “Mental health is an ongoing process of dedication to reality at all costs.” The pinch point for grandmothers is that any loss of relationship with our adult children means strained relations – if not severed ties – with the grandchildren who now light up our lives.

I am a mother of three and grandmother to 11. I stayed with their father for more than 20 years believing that somehow I could make him feel loved enough to change.

Over time, each of my children has drawn close to me for healing, and pulled away for the same reason. I am, after all, the one they hold responsible for the shifting emotional sand in their psyche.

Ten years ago, I remarried a man whose children were also grown. We imagined that would alleviate the adjustments of step-families. In some ways, not having children in the home made it easier to forge our identity as a married couple.

Although we shared values, we didn’t share history with each others’ children. We each brought our traditions and expectations to bear. When I recently chose to divorce this man who had played “grandpa” to my children’s children, old wounds surfaced.

Had I known that to leave him meant I would lose my only local family, I probably would have stayed for the sake of the grandchildren. It’s that old programming baby boomer women still struggle with.

If something isn’t working, you try harder. Marital problems? Pray more, love more, give more, be patient, and wait it out. Suck it up, stuff it down, be quiet and don’t make waves.

I have identified four distinct stages in the journey to wholeness.

Our lives become (or continue to be) a carefully constructed illusion based on how it looks, what people will think, and what we imagine will get us the love and security we so desperately crave.

This is why grandmothers continue to “make peace at all costs” rather than saying what they see, need and want. Some have called it the disease to please.

Pretending that everything is okay when in our hearts we know that is not true can only go so far. We go along to get along. We smile in public and cry in private. We live a lie, and it eats at our souls every day.

Women think if we ignore it, maybe it will go away or time will heal all wounds. The thing is, time doesn’t heal buried pain. It has to be unearthed and acknowledged before it will pass away. Pain that gets buried alive poisons the rest of our lives.

Divorce is a harsh word when applied to our mother-child relationships, isn’t it? But it happens whether we acknowledge it or not. Divorce occurs when all communication has broken down and attempts at reconciliation fail.

It is the most painful dark night of the soul. With divorce comes all the drama of severed relationships, he-said she-said finger pointing, and drama triangles where people talk about each other, but never directly to one another so healing could occur. We might as well lawyer up and some do. It’s called Grandparent Rights.

Last is the place of acceptance. There is no anger, no angst, no more bargaining. It is where we accept what life is handing out right now and the fighting is done.

You have decided what you do and do not want, what you will and will not stand for, and are making decisions to move forward with or without the resolution you may have hoped for. You are free to stay or go because you have become dedicated to reality at all costs.

What’s Next for You and Your Adult Children?

Do I wish I had capacity back then to do some things differently? Definitely. Do I regret what I allowed my children to endure because of the choices I made? Mm-hmm.

Is there anything I can do now to go back and change it? Not a damn thing. Does it serve anyone for me to live in remorse and regret? Nope. Not now, not ever. Never.

Nobody had a perfect childhood – at least nobody in my generational gene pool. We all did the best we could with what we had to work with at the time. That is as true today as it was generations ago.

The biggest healer for women in daughter divorces is to break the shame by breaking the silence. Let’s talk about what’s real and how to help live dreams without drama in our later years.

Where do you find yourself in the process of letting your adult children go? Where are you on the journey to finding yourself in your sixties? Please share your thoughts below!

Staycation – 9 Ideas for a Holiday at Home This Year