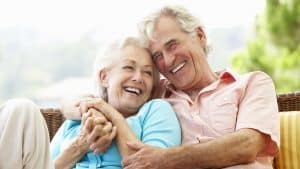 The death of my husband more than a decade ago was the toughest experience of my life. I had turned 60 just a month before his passing.

I fully expected that at my age and stage of life, I should and would be content with my professional work, family, girlfriends, church, and other groups I belonged to.

Indeed, within a year of my husband’s passing, I started writing a book to assist other widows: Moving Forward on Your Own: A Financial Guidebook for Widows. It certainly helped heal my broken heart as I worked through my grief and learned to accept my new life.

Like the title of my book, I was sure I would be ‘on my own’ forever.

In a study published several years ago, nearly one of five recent widows either remarried or embarked on a new long-term relationship within a few years of their spouse’s death. Younger women were more likely to embrace a new romance, whereas older ones expressed negative feelings about remarriage and dating.

Many women in the study shared their experience with repartnering, counseling women to proceed slowly and be honest about the negative as well as positive consequences of a new committed relationship.

That was me after my husband’s death. I firmly declared, “I’ll never marry again.”

But dating? Maybe that could be different. By the end of my first year of widowhood, I decided that dating would probably be OK for me.

An occasional social outing with a male companion might be fun. Possibly dinner at a nice restaurant with a guy across the table would be pleasant. Or attending a concert or the theater with a man could be enjoyable.

Hang in There – Don’t Just Settle

After being out of the dating game for more than two decades, initially I didn’t know how to play. It seemed to me the rules had changed. Looking back at my first dates, you might even say I was pathetic.

When I tried online dating, I didn’t realize that many of my potential partners’ profiles didn’t describe them honestly. For example, many men posted pictures taken years ago when they were in better physical shape. Some lied about their smoking and marital status, or financial situation.

Fortunately, I didn’t make any big mistakes as a novice dater. Early on though, I almost made some blunders, spending time with guys who tried to take advantage of me. I was quite naïve, to be honest.

It helped a lot when I created my personal list to help screen in or out potential dating candidates. Here are some examples:

Unfortunately, I’ve met several widows and divorcees who just plunged in to any dating relationships that came along. Some even remarried too quickly, before they really understood their new partner, and later regretted it.

Others became seriously involved because they were lonely or afraid to be on their own. Some married hoping for financial stability. Or they didn’t realize before they remarried that their new partner had not been totally frank about his problems. Several were simply taken advantage of.

Because these women just settled, they found themselves trapped in bad new relationships – worse off than being alone. Sadly, many of those marriages ended in divorce.

I dated casually for a few years, adamant in my commitment never to consider remarriage. That resolve made several of my dating relationships very awkward. The guys wanted to marry, but I didn’t. Several of them actually proposed. When I declined, it ended the relationship.

A Change of Heart

But today, many years later, Charlie and I are engaged! The time was right – my 71st birthday and just starting our eighth year together. We took this next step, moving forward together. I’m wearing Charlie’s ring. Yes, we’re officially engaged.

I love what this decision represents. We’ll certainly always cherish memories of our late spouses, who both died more than a decade ago. Now an exciting time lies ahead for us as we start a new phase of our relationship.

Moving forward together as an engaged couple, with love, commitment, joy, high hopes, laughter, adventure and companionship. Yes, now the time is finally right. I’m feeling so happy and grateful.

After the death of your spouse or a divorce, did you also say ‘never again’ to the possibility of a committed new relationship or even remarriage? How has that worked out for you? Please join the conversation below.