Lessons on Aging from My Mother and Grandmother 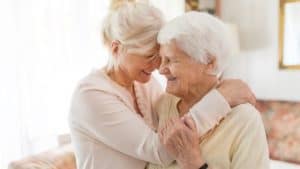 Now that I have become “their age” I find myself thinking a lot about my grandmother (Tania) and my mother (Helen). After all, they were my first aging female role models.

When they were the age I am now (in my 60s), I didn’t give their age a thought because, like all daughters, I was consumed with the drama of my own life – deeply embedded in childrearing and a bad marriage.

One thing I do remember, though, is
that I was always amazed at how I seemed to be getting older, whilst they
seemed to stay the same age: comfortably, nicely, calmly old. Or, ageless.

What I would give to be able to talk
to them now, to ask their advice about aging! The only thing I can do is remember
and form my own conclusions from what I saw and experienced.

For starters, they never talked about
age. It wasn’t because they were shocked or ashamed of their age. Rather, it was
because they felt talking about age is… useless… and boring! There’s nothing
you can do about it. And there are so many more interesting things to talk
about!

We spend all our lives taking care of
ourselves so we can get to old age – it makes no sense to complain about it
when we get there. My mother and grandmother “just” lived and enjoyed. They
were both vital women until the very end when they were felled by terminal
illness and passed away.

The Power of Lipstick

My mother and grandmother understood
and believed in the power of good grooming. They didn’t do it for others, they
did it for themselves. Even on days when my mother didn’t particularly have any
plans for going out, she smoothed her complexion with powder and put on her red
lipstick.

Neither woman had the taut skin and
bloom of youth, but they were empowered by being soigné and perfumed. Whilst
they did their own manicures at home, they went to the salon for perms, cuts
and color.

I understand this insistence on
grooming because I do the same thing. Red lips, a fluff of powder and I feel
amazing and ready for anything.

Dashing Over to Bloomingdale’s

The power of fashion never ends; its
eternal promise to make you feel a certain way, or to reinvent yourself with a
new style. My mother and grandmother both were seriously interested in fashion
and keeping their wardrobes fresh.

They taught me that the great thing
about being retired is that you can wait for things to go on sale. There’s the
fun of stalking an item as it drops in price and the triumph of finding a great
bargain.

My grandmother lived in New York City
and favored slacks, a low stacked heel and nice blouses accented with costume
jewelry: large chains and large earrings. She never wore rings or bracelets as
she was a pianist. As an urban woman, she understood the power of a great coat.

My mother had suburban style. She
looked jauntily sophisticated with freshly pressed jeans or black pants with a
chic Eileen Fisher sweater and a beautifully cut designer fleece vest. She
preferred small gold necklaces, diamond stud earrings and rings on her fingers.
Both of them loved really good shoes.

My mother and grandmother felt
shopping was a social activity and a good reason to get out of the house and
merge with humanity on days when they might have felt a little lonely or down.

Shopping didn’t have to mean buying,
it could mean mingling on the street, in stores and malls, people watching,
enjoying, having a cup of tea and returning home.

Both my grandmother and mother remained
involved in meaningful activity with part time work. My grandmother had been a
rehearsal pianist at the School of American Ballet, the academy for the New
York City Ballet. She worked part time in her later years as she loved having a
place to go and people to socialize with.

My mother was a part-time bookkeeper
for the local Nature Center in our town. She too relished the sociability it
provided, as well as the funding it offered for her fashion forays and travel.

In her later years, my mother read the
news reports when scientists and nutritionists declared that eating butter was
no worse than eating margarine. She was furious! She had spent her life eating
the horrible, salty, oily tasting margarine she hated because she had been told
it was healthier than butter.

The next day, there was butter in the
house. Peanut butter had been vilified as high calories, and we never had it in
the house. When it became “natural health food” a jar appeared in the cupboard.

“Everything in moderation” is the
lesson here. And that’s why there’s a small container of fresh half and half in
my fridge. When it comes to my morning coffee, I love the rich mellow taste of
creme. It’s my luxury and I deserve it.

My grandmother was surrounded by
young, slim ballerinas, and she kept up with their trials and triumphs. I think
they were also the reason she kept her figure her whole life.

She was the original nutritionist,
eating her generation’s version of healthy food – prunes, cottage cheese, very
little meat and a light dinner at night.

My mother enjoyed all the young people
at her job as well. She grocery-shopped daily, like a European, choosing that
night’s dinner with care and delight.

They Were Positive and Never Complained

I don’t remember my mother or
grandmother ever complaining about their aches and pains. I know they had them,
it’s inevitable given what I know now about the aches and pains that accompany
the aging body. They just got on with living, with enjoying what they could.

Two final thoughts to share with you. Their
zest for life is what made them ageless. Staying interested, staying involved,
being curious, enjoying. Art, politics, people, society, culture, nature. Zest
for life gives you energy and pleasure.

And finally, they taught me that “life
can turn on a dime,” so “don’t postpone joy.” That’s hardly news. We know it’s
true our whole life, but never more so when you get older. So: Full pleasure
ahead and “don’t spare the horses!”

What did you learn from your grandmother
and mother about aging? The lessons can come both positively and negatively. Do
share with us below! It’s your chance to join the conversation! We want to
know!

Two Words That Help When Someone Experiences a Death or Loss